The LJTick-Divider (LJTD) is a signal-conditioning module designed to divide 2 single-ended channels of higher voltage analog signals down to 0-2.5 volt signals. The stock builds are for 0-10 volt inputs (UNI10V) or ±10 volt inputs (BIP10V). The 4-pin design plugs into the standard AIN/AIN/GND/VS screw terminal block found on newer LabJacks such as the U3, U6, and UE9. The use of large resistors and a precision op-amp buffer provide an input impedance of 1 MΩ. By adding or replacing resistors, many other configurations are possible.

VINA/VINB: These screw terminals are for the 2 single-ended channels of input analog voltages. With the factory default configurations (UNI10V or BIP10V), the input to either of these terminals is typically 0-10 or ±10 volts, and produces 0-2.5 volts on the respective OUT pin.

GND: Same as LabJack ground. VINA/VINB must be referred to this ground.

(1) The maximum input voltage to the buffer amplifier is VS-1.5, so for proper operation with signals up to 2.5 volts, VS must be greater than 4.0 volts. 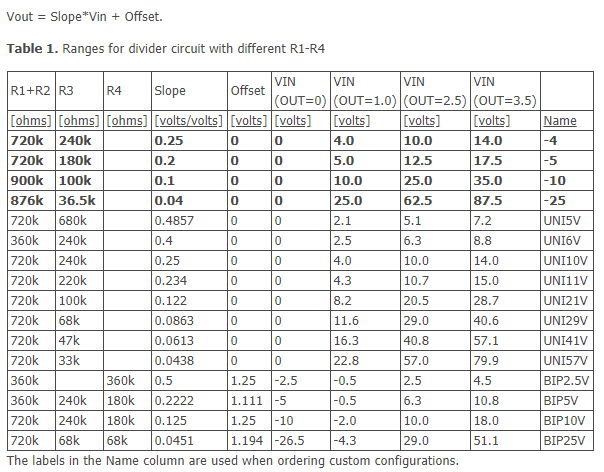