How does a Loadcell (force transducer) work ?

What is a Load Cell, Force Sensor or Force Transducer?

By definition, load cell (or loadcell) is a type of transducer, specifically a force transducer. It converts an input mechanical force such as load, weight (aka weight sensors), tension, compression or pressure (aka pressure sensors for pressure measurement - What is a pressure sensor?) into another physical variable, in this case, into an electrical output signal that can be measured, converted and standardized. As the force applied to the force sensor increases, the electrical signal changes proportionally.

How does a load cell work?

Firstly, we need to understand the underlying physics and material science behind the load cell working principle, which is the strain gauge (sometimes referred to as Strain gage). Metal foil strain gage is a material whose electrical resistance varies with applied force. In other words, it converts (or transduces) force, pressure, tension, compression, torque, weight, etc… into a change in electrical resistance, which can then be measured. So, metal foil strain gauge is the building block of force sensor working principle. Weight measurement using strain gauge bridge is also one of the comment applications of this technology.

Strain gauges are electrical conductors tightly attached to a film in a zigzag shape. When this film is pulled, it – and the conductors – stretches and elongates. When it is pushed, it is contracted and gets shorter. This change in shape causes the resistance in the electrical conductors to also change. The strain applied in the load cell can be determined based on this principle, as strain gauge resistance increases with applied strain and diminishes with contraction. 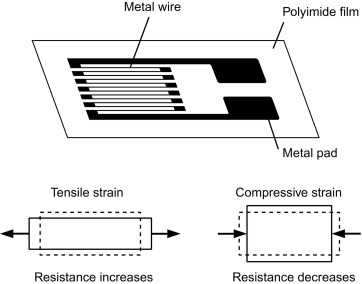 Structurally, a force sensor (or transducer) is made of a metal body (also called flexure) to which foil strain gauges are bonded. The sensor body is usually made of aluminum or stainless steel, which gives the sensor two important characteristics: (1) provides the sturdiness to withstand high loads and (2) has the elasticity to minimally deform and return to its original shape when the force is removed.

When force (tension or compression) is applied, the metal body acts as a “spring” and is slightly deformed, and unless it is overloaded, it returns to its original shape. As the flexure deforms, the strain gage also changes its shape and consequently its electrical resistance, which creates a differential voltage variation through a Wheatstone Bridge circuit. Thus, the change in voltage is proportional to the physical force applied to the flexure.

These strain gauges are arranged in what is called a Wheatstone Bridge Circuit (see load cell circuit animated diagram). This means that four strain gages are interconnected as a loop circuit and the measuring grid of the force being measured is aligned accordingly.

The load cell amplifier module (or load cell signal converters) provide regulated excitation voltage to the load cell Wheatstone bridge amplifier and convert the mv/V output signal into another form of signal that is more useful to the user. The signal generated by the strain gage bridge is low strength signal and may not work with other components of the system, such as PLC, data acquisition modules (DAQ), load cell data logger, computers, or microprocessors. Thus, strain gauge amplifier functions include excitation voltage, noise filtering or attenuation, signal amplification, and output signal conversion (i.e. load cell ADC ).

Furthermore, the change in the strain gauge amplifier voltage output is calibrated to be linearly proportional to the Newtonian force applied to the flexure.

An important concept regarding force transducers is load cell sensitivity and accuracy. Force Sensor accuracy can be defined as the smallest amount of force that can be applied to the sensor body required to cause a linear and repeatable variation in the voltage output. The higher the force transducer load cell accuracy, the better, as it can consistently capture very sensible force variations. In applications like high precision factory automation, surgical robotics, aerospace, load cell linearity is paramount in order to accurately feed the PLC or DAQ control system with the accurate force measurement. Some of our Universal Pancake Load Cells presents Nonlinearity of ±0.1% (of Rated Output) and Nonrepeatability of ±0.05% RO.

What are the advantages of strain gage-based load cells?

What are the types of Load Cells?

Although there several technologies to measuring force, we will focus on the most common type of load cell: metal foil strain gauge. Within the types of force sensors, there are a variety of body shapes and geometries, each one catering to distinct applications. Get to know them if you want to buy load cell:

Other unique designs are also available such as the load pin load cells (aka load cell pin), seat belt load cell, and others.

This text was written by FUTEK Advance Sensor Technology in USA. PIMZOS is the distributor for FUTEK in the Benelux.